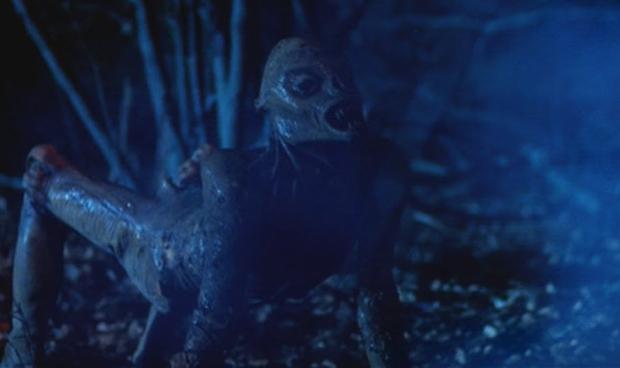 Bruce looked through the window in the door and observed the creature as it feasted. Though he was skinny, the creature was still a fearsome sight to behold, with pale blue skin, bear-like fangs, clawed hands and feet, spurs jutting from the backs of his ankles, a long tail tipped with spikes, and those eyes – the eyes which always seemed to blaze with intelligence and mad hilarity.

The creature had a skinny build which made him look like a weakling, but in actuality he was a powerhouse. He was much stronger than he looked and could easily take down any professional fighter in seconds. He also had fantastic energy powers that enabled him to fire energy blasts and cloud the minds of others, possibly inducing terrifying hallucinations. He had a cunning mind which enabled him to use his powers and abilities to the fullest, though his mind was also warped. The scars on the creature’s chest, remnants of self-inflicted wounds, were ample evidence of the creature’s madness and lack of restraint.

Bruce could see the seal on the creature’s forehead, the symbols spelling the Hebrew word for “Friendship”. He flashed back to the day he reluctantly joined with Joel for the mission. Joel had called the creature to order to help them. The creature told Joel that he’d be happy to help, but was worried that he might “flip out”. In response, Joel had dripped his finger in ink and written the word upon his forehead.

He explained that it was a reference to both Proverbs 18:24 (“A man that hath friends must show himself friendly: and there is a friend that sticketh closer than a brother”) and John 15:15a (“Henceforth I call you not servants; for the servant knoweth not what his lord doeth: but I have called you friends”). The creature had been okay after that, working along with Joel every step of the way. Bruce’s face contorted into a wicked grin. He had worked together with Joel for the mission, but he now considered their alliance over. Joel would regret leaving him alone with the creature, he thought. With the creature still subdued, he would take control of him and use him for his own sinister purposes.

Bruce boldly entered the building, slammed the door shut, and locked it. The creature stopped eating his six-layer sandwich and looked at him. Upon sensing Bruce’s ill-intent, he began glaring at him. Without hesitation, Bruce told him, “You’re mine now, you ugly monster.” Ignoring the rage welling in the creature’s eyes, he continued, “I’m taking control. With that seal on your forehead, you’re prevented from attacking, so now you’re going to do just what I tell you to.”

The creature sat in silence for a moment and then gave a laugh. It started out as a laugh of amusement, but then sadistic glee began bubbling up through it. Bruce stared in surprise, and finally the creature stopped laughing and, grinning wickedly as he pointed to his forehead, asked, “Did you really think this seal has some power to prevent me from using my powers? I’m not a jinni or anything. You see, Joel helped me out in my time of need, something I’m grateful for. Neither one of us wanted me to flip out, so he drew this symbol on my forehead as a reminder of our friendship. It never had mystic power or anything like that. It was just a reminder of my gratitude and his compassion. It worked only because I didn’t want to hurt Joel.” He licked his hand to moisten his fingers. “It’s useless to protect someone I want to hurt.”

Bruce quivered and stared in horror as the creature laughed, wiped the ink off his forehead, and began approaching him.

Written by Raidra
Content is available under CC BY-SA

Retrieved from "https://thehorrornetwork.fandom.com/wiki/Binding_Symbol?oldid=5825"
Community content is available under CC-BY-SA unless otherwise noted.